Program#/Poster#:
509.6/PP9
Title:
Small interfering RNA-mediated selective knockdown of NTS2 receptors reverses neurotensin-induced analgesia in rats
Location:
San Diego Convention Center: Halls B-H
Presentation Start/End Time:
Monday, Nov 05, 2007, 2:00 PM - 3:00 PM
Authors:
*L. DORE-SAVARD1,2, G. ROUSSY1, M.-A. DANSEREAU1, K. BELLEVILLE1, N. BEAUDET1, M. BEHLKE2, P. SARRET1; 1Physiology and Biophysics, Univ. Sherbrooke, Sherbrooke, PQ, Canada; 2Integrated DNA Technologies Inc., Coralville, IA
We have previously shown that NTS2 receptors play an important role in the regulation of nociceptive functions at the spinal level. Indeed, intrathecal (i.t.) administration of NTS2-selective agonist, levocabastine and JMV-431, induced a dose-dependent antinociceptive responses in the tail-flick test. Recent discoveries revealed that the delivery of small interfering RNA (siRNA) in vivo resulted in the potent, long-lasting, post-transcriptional silencing of specific genes. Thus, we investigated the effect of i.t. injection of siRNA targeting NTS2 receptors for the modulation of pain. Using Real-time PCR analysis, we first identified several siRNA capable of a high-selective attenuation of NTS2 message in rNTS2 stably transfected CHO cells. Dicer-substrate siRNA (DsiRNA), which have been shown to have increased potency in vitro compared to 21-mers, were therefore administered i.t. at the lumbar spinal cord level on days 0 and 1 at a dose of 1 µg formulated in the cationic lipid i-Fect transfection agent. Twenty-four hours after the last dose of DsiRNA, NTS2 protein levels were markedly reduced when examined by Western blot in dorsal root ganglia (DRG, 43.4%) and spinal cord (27.4%), compared to rats receiving control DsiRNA. Rats were then tested for antinociception by the NTS2-selective agonist, JMV-431 in the tail-flick test. Pretreatment with the DsiRNA targeting NTS2, but not the mismatch RNA or vehicle alone reduced by 93.3% the analgesic effects of JMV-431. The functional inhibition of NTS2 by DsiRNA was progressively reversed within 4 days after the last RNA injection. Texas Red-labeled DsiRNA were clearly detected in the cytoplasm of both lumbar DRG and spinal cord neurons, indicating that DsiRNA were taken up and transported within spinal nociceptive structures. Taken together, these results demonstrate that silencing of NTS2 receptors using a DsiRNA approach abolishes NT-induced antinociception and further support a role for NTS2 in the management of acute pain.
Disclosures:
L. Dore-Savard, None; G. Roussy, None; M. Dansereau, None; K. Belleville, None; N. Beaudet, None; M. Behlke, None; P. Sarret, None.
Support:
CIHR, FRSQ and CRS
[Authors]. [Abstract Title]. Program No. XXX.XX. 2007 Neuroscience Meeting Planner. San Diego, CA: Society for Neuroscience, 2007. Online.2007 Copyright by the Society for Neuroscience all rights reserved. Permission to republish any abstract or part of any abstract in any form must be obtained in writing by SfN office prior to publication.
Posted by Neuromics at 5:44 PM No comments:

More on Delivering siRNA in vivo

We are excited about this upcoming presentation at Society for Neuroscience comference presesentation. Neuromics' i-Fect ™ reagent was used to deliver siRNA in vivo to silence the NTS2 gene.

Copyright by the Society for Neuroscience all rights reserved. Permission to republish any abstract or part of any abstract in any form must be obtained in writing by SfN office prior to publication
Posted by Neuromics at 5:29 AM No comments: 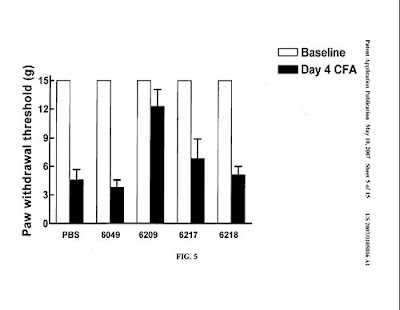 Link to patent: Free Patents Online
[0241] The effect of siRNAs against Nav1.8, formulated with iFECT, on complete Freund's adjuvant-induced tactile hypersensitivity was evaluated in rats (FIG. 5). Adult male Sprague-Dawley rats received an injection of CFA (150 uL) into the hindpaw on day 0. siRNAs against Nav1.8 were then administered by intrathecal bolus to the lumbar region of the spinal cord on days 1, 2 and 3; specifically, for each bolus injection, 2 ug of siRNA was complexed with iFECT transfection reagent (Neuromics, Minneapolis Minn., USA) at a ratio of 1:4 (w:v) in a total volume of 10 uL. Five groups of rats (with 5 rats per group) were treated with either siRNA (AL-DP-6049, AL-DP-6209, AL-DP-6217 or AL-DP-6218; Table 1), or PBS, in the presence of iFECT. Tactile hypersensitivity was expressed as tactile withdrawal thresholds which were measured by probing the hindpaw with 8 calibrated von Frey filaments (Stoelting, Wood Dale Ill., USA) (0.41 g to 15 g). Each filament was applied to the plantar surface of the paw. Withdrawal threshold was determined by sequentially increasing and decreasing the stimulus strength and calculated with a Dixon non-parametric test (see Dixon, W. J. (1980) "Efficient analysis of experimental observations" Annu Rev Pharmacol Toxicol 20:441-462; Chaplan, S. R., F. W. Bach, et al.(1994) "Quantitative assessment of tactile allodynia in the rat paw" J Neurosci Methods 53:55-63). Tactile thresholds were measured before CFA injection to assess baseline thresholds, and then on day 4 after CFA and treatment with test articles. In rats treated with PBS, tactile hypersensitivity was pronounced on day 4, as evidenced by reduced paw withdrawal threshold, as expected. In rats treated with AL-DP-6209, tactile thresholds were nearly normalized on day 4, demonstrating that the Nav1.8 siRNA, AL-DP-6209, is efficacious in vivo against inflammation-induced hyperalgesia. Treatment with the Nav1.8 siRNA, AL-DP-6217, resulted in the average tactile threshold trending towards baseline, with one of five rats demonstrating a normal tactile response. AL-DP-6049 and AL-DP-6218 did not significantly alter tactile thresholds compared to PBS treatment, in this experimental paradigm.[0242] These results demonstrate that siRNAs targeting Nav1.8, formulated with transfection reagent and administered intrathecally, alleviate CFA-induced tactile hyperalgesia, and therefore represent a novel approach to providing effective treatment of clinical inflammatory pain.
Posted by Neuromics at 5:07 PM No comments:

We have added a new set of products that magnetically drive transfection.

MATra products are designed to enhance the transfection capabilties of our i-Fect and pn-Fect kits.

The technique requires lease or purchase of the Universal Magnetic Plate AND for i-Fect and other siRNA transfection reagents, please also purchase the MATra-siRNA Reagent. For pn-Fect and other Nucleic Acid transfectants, you would buy the MATra-A Regeant.
If your cells are in suspension, you will also need MATra-s-Immobilizer.
Manual for All MATra Products
MATra FAQs

We are working with an investigator on using RNAi to relieve pain and his study prompted some discussion about the length of time before an effect is seen. It is important to note that these types of experiments take time to see an effect. In studying the pain response, the effect may take even longer.

Another study by Hemmings-Mieszczak et al (Nucleic Acids Research, 2003, Vol. 31, No. 8 2117-2126) showed that in an in vitro model, oligofectamine-mediated transfection of siRNA resulted in 60±90% downregulation of P2X3, but only after about 3 days.

So a key factor in any siRNA transfection study is to carry the experiment out long enough, which in in vivo work can be longer than for in vitro studies. As Mark points out, "Normally in cell culture we would look at mRNA levels at 24 h and protein levels at 48-72 h post transfection, depending upon the cell division rate and the half life of the protein. Long lived proteins in non-dividing cells could theoretically take multiple administrations of reagent over a week or more to knock down your targeted protein in vivo."

We welcome any comments on you experiences with transfecting primary cell lines with cationic lipids and/or electroporation.

"Just wanted to give you a project update. We have good transfection conditions worked out for LTK cells and CHO cells now. Different reagents and different conditions proved to be optimal for each cell line.

The LTK cells proved to be a real nightmare. We were testing out different siRNAs and had a weird problem that it seemed that none of the siRNA worked even a little, with the weird observation that our controls were “very low”. After quite a bit of investigation, we finally figured out that the LTK cells were triggering an IFN pathway response to the siRNAs. Unfortunately, it was a bit odd and it took some time to figure out what was going on. The cells did not just “die” or show changes in the usually time frame expected for Type-I IFN responses, but clearly were activating new cytokine related transcription units. The promoter driving your transgene is regulated by the transcription factors induced, such that NTS1 mRNA levels increased upon transfection. The controls were “low”, showing basal levels, and the transfected cells were all “high”. It turns out that our dye-labeled transfection control sequence was triggering the pathway in a sequence-specific fashion. We are now leaving out the transfection control and things are OK. We can also totally evade the response using 2’OMe modified duplexes (we usually use these modified duplexes for siRNA intended for IV administration, since exposure to PBMCs usually triggers any/all possible IFN responses).

We can avoid these responses and now have the assay system working. So, we can finally start proper testing!"

"It looks like the I-fect delivered the control labeled IDT oligos to approximately the right place in the rat hippocampus 48 hours post-injection. After my research assistant comes back from her vacation, we will try a longer time point, 72 hours and alter our stereotactic coordinates slightly to more directly target the CA3 subregion. After that we will try the real siRNA injections with I-fect, hopefully in the next few weeks. I will keep you all posted to whether this really works."
Posted by Neuromics at 11:18 AM No comments:

Protocols for Delivering siRNA to Neurons

Here's a link to the protocol: Transfecting Schwann Cells with i-Fect and below are related data.

Figure:si RNA-mediated suppression of target gene expression in Schwann cells. A, Detergent extracts of siNeg- or siGly1- transfected Schwann cells were digested with heparitinase and subjected to immunoblot analysis with anti-glypican-1 antibodies (top);aliquots of undigested extracts wereimmunoblotted with anti-actin antibodies (bottom) to verify equal sample loading. B, Cell surface expression of glypican-1 was assessed by immunofluorescent staining of transfected cells 48 h after transfection using anti-glypican- 1 antibodies (green) and DAPI (4',6'-diamidino-2 phenylindole) to stain nuclei (red). C, Schwann cells were transfected with siNeg or si 4(V)and conditioned media and cell lysates were harvested 48 h later (left) or at the indicated times after transfection (right);aliquots of medium (top) or cell lysates (bottom) were subjected to immunoblot analysis and stained with anti- 4(V) collagen (top) or anti- -actin (b ottom) antibodies.
intrathecal in vivo delivery of siRNA(pdf - 57Kb)
Publications:
Progress Towards in vivo Use of siRNAs
siRNAi: Applications in Functional Genomics and Potential as Therapeutics
Assembly and Function of RNAi Silencing Complexes
Synthetic dsRNA Substrates Enhance RNAi Potency and Efficacy
Posted by Neuromics at 2:33 PM No comments: