i-Fect and the Study of Glomerulosclerosis (Kidney Disease)

in vitro RANK knockdown system to determine whether RANK was necessary for podocyte survival.

Our i-FectTM Transfection Kit is widely used and frequently published as a potent tool for gene expression analysis. In this study i-Fect was used to consistently achieved close to 71.6% siRNA transfection efficiency in podocytes: Shuangxin Liu, Wei Shi, Houqin Xiao, Xinling Liang, Chunyu Deng, Zhiming Ye, Ping Mei, Suxia Wang, Xiaoying Liu, Zhixin Shan, Yongzheng Liang, Bin Zhang, Wenjian Wang, Yanhui Liu, Lixia Xu, Yunfeng Xia, Jianchao Ma, Zhilian Li. Receptor Activator of NF-kappaB and Podocytes: Towards a Function of a Novel Receptor-Ligand Pair in the Survival Response of Podocyte Injury. PLoS ONE: Research Article, published 25 Jul 2012 10.1371/journal.pone.0041331......RANK small interference RNA (siRNA) knockdown was performed by using transient transfection of pooled, functionally validated Cy3–labeled RANK siRNA (Invitrogen) [16]. Podocytes that were differentiated for 10 to 12 d were maintained at 10% FBS/RPMI as described above, and transfected using the RANK siRNA transfection reagent (Neuromics). For determination of the transfection efficiency, a Cy3–labeled RANK siRNA was analyzed by flow cytometry. Western blot analysis for RANK was performed with samples from cells 24 to 96 h after the transfection. Several concentrations of RANK siRNA (20, 40, and 60 nM) were tested to determine optimal knockdown conditions...
Data Highlights: To better understand RANK function in immortalized mouse podocytes, we used an in vitro RANK knockdown system to determine whether RANK was necessary for podocyte survival [33]. We consistently achieved close to 71.6% siRNA transfection efficiency in podocytes, as visualized by transfecting a fluorescently tagged Cy3-RANK siRNA. Flow cytometry fluorescence of podocytes not transfected with siRNA-Cy3 was measured as negative control; the value in podocytes was 4.1% (Figure 5A,5B and 5C). Knockdown of RANK was determined to be maximal between days 3 and 4 after transfection (Figure 5D). We did not observe any morphologic changes between cells with or without RANK siRNA knockdown during the 4 d after transfection. To test whether RANK was involved in the apoptosis of podocytes in vitro, we studied podocytes apoptosis before and after stable knockdown of RANK with siRNA. The knockdown of RANK alone did not induce podocytes apoptosis, but increased mildly the apoptosis of podocytes exposed to PA. However, RANKL reduced apoptosis of podocytes transfected with RANK siRNA exposed to PA compared with control siRNA (RANK siRNA 16.5±1.5% versus control siRNA 24.0±1.8%, p<0.01, Figure 5E). 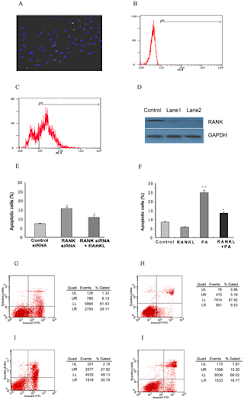 The upregulation of RANKL and RANK, in combination with the significant protective effects of RANKL, indicates that RANK is part of an adaptive, recovery response to podocyte injury. This is the first observation that RANKL, acting through RANK, functions in an injury paradigm in the kidney. These data raise the exciting therapeutic possibility of giving exogenous RANKL to patients with glomerular disease that is characterized by a loss of podocytes, such as membranous nephropathy and focal segmental glomerulosclerosis.
Posted by Neuromics at 9:59 AM