Research shows that rats and humans on a high-fat diet (HFD) are less sensitive to satiety signals known to act via vagal afferent pathways. Impaired vagal afferent responsiveness to both gastric satiety hormones (CCK and leptin) and mechanical stimulation raises the possibility that changes in electrophysiological properties may be the underlying mechanism responsible for impaired vagal responsiveness to a wide variety of satiety signals. 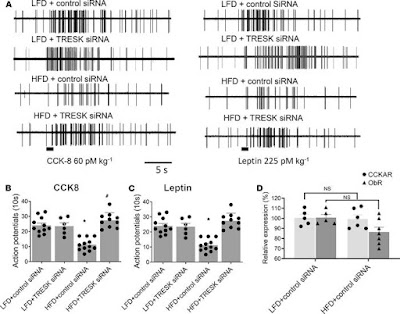 
Following 2 weeks of high-fat feeding, there was a significant upregulation of TRESK and a modest increase in TASK1 channels in the NG. Silencing studies indicate that the upregulation by TRESK channels is mainly responsible for a global decrease in excitability of vagal sensory neurons, which in turn dampens the response to satiety signals, such as CCK and leptin.

This make TRESK a potential therapeutic target for treating Obesity.

Posted by Neuromics at 7:46 AM